Following 184 hearing days in the Landgericht Duisburg, Germany’s largest legal media event in the history of the Federal Republic of Germany has come to a close. The so-called “Loveparade Trial” is the criminal proceeding about the outcome of the devastating 2010 Loveparade Festival accident in Duisburg, which claimed 21 lives and caused a minimum of 600 injuries, many of which resulted in severe physical and psychological impacts.

Throughout the case, Janssen + Maluga Legal have been acting as auxiliary prosecutors for a number of victims from 5 nations – New Zealand, Australia, England, Germany and the Netherlands.

From the beginning of JML’s coverage of the proceedings in 2017, it had been clear that the important nature of this case would result in its longevity. Even one of the original predictions of a 110-hearing day duration fell rather short of the final 184-day outcome.

Through the unceasing efforts of Prof Dr Gerhard Janssen, JML’s employees and associates, our clients received compensation 5 years ago. Throughout the trial, the Court also established the mistakes made by the City of Duisburg, the event organisers and the police.

The Loveparade Trial has not just been covered by sources such as the FAZ & DW throughout Germany over the last few days. The global impact of such a proceeding is evident in its world-wide coverage by major international newspapers and broadcasters such as BBC, The New York Times and ABC, as well as online newspapers from France, China, USA, Canada, Italy, India, Luxembourg and Switzerland.

The Court’s decision to close the case is rooted in the upcoming end of the 10-year limitation period this July.

Australian’s will in favour of the International Committee of the Red Cross (ICRC).

Advice was provided to Geneva based global humanitarian organisation ICRC, following an Australian citizen’s intent to include the ICRC as sole beneficiary under his will, on administrative processes upon death, safeguarding ICRC’s timely access to the estate management process in Australia due course.  ICRC provided the following comment regarding our Legal Practitioner Director Mr Marc Montandon:

“I highly recommend the excellent, very professional services of Mr Marc Montandon, who always takes the time to respond to our requests in a very complete manner and in a very short time.”

After saving up for three years and working hard an Australian musician travelled to Berlin to develop his music career. While crossing a road on his bike through red traffic light, a car sped towards him through a red light. The client was hit at 60 km/h and thrown 10 meters into the air. He was rushed to the hospital by an ambulance and taken straight to an ICU, where severe.

The client spent months attending appointment after appointment while trying to learn enough German to understand the insurance, medical bills and medical system. The incident resulted in physical and mental damages, restricting his capacity to work. The money that was saved up for the client’s career ended up being used to support their recovery.

Because of the injuries sustained he could not resume his job. He had to rely on unemployment benefits which was low compared to the cost of living and he could not afford the necessary medical treatments.

After the client’s return to Australia he changed his legal representation to Janssen + Maluga Legal, a German-Australian personal injury law firm. Prof. Dr Gerhard Janssen was in close contact with the client throughout the case, especially in difficult times. Thanks to the hard work of Prof. Dr Janssen and his team the case was settled out of court in Germany. JML paid all the costs and disbursements in Australia and Germany and settled for three times the client’s expectation although contributory negligence had to be accepted due to his running of the red light. 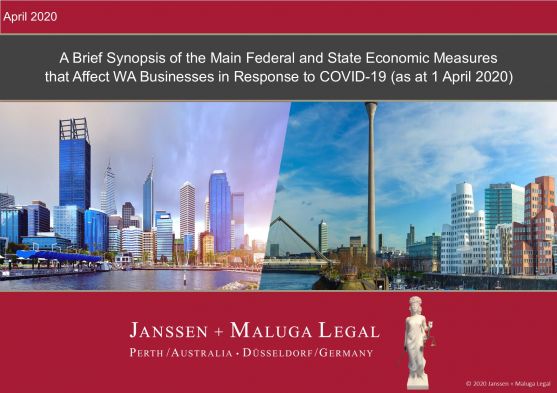 Janssen + Maluga Legal is proud to support our global acting Western Australian client Ozgene by setting an International capacity for COVID-19 testing. Thank you to Ozgene for permitting the use of the YouTube Video!

While on holiday in Australia, a German businesswoman, acrobat, artist and lecturer was in the front passenger seat during a head-on collision. Without anytime to evade or to brake, the other car crashed into her. Expecting to relax in Australia and return to Germany fully rested, she returned to Germany, declared physically unfit to continue her career and business practice.

Due to the accident, she suffered from a distortion of the cervical spine, a fractured sternum, contusion of the pelvis, a ruptured nerve in her left thumb, post-traumatic stress disorder and insomnia.

Her injuries have not just impacted her physical capabilities but also forced her to change career pathways. They have left her with permanent reminders of the accident that will affect her for the rest of her life.

Soon after the incident she contacted Prof Dr Gerhard Janssen, who with over 25 years of experience in personal injury law was very capable of handling such a case and was determined to help her. Due to the tireless effort of everyone at JANSSEN + MALUGA LEGAL’s and guidance of Prof Dr Janssen, she was able to settle out of court and receive her settlement. Which will assist her with the financial burden of being unable to continue her previous line of work.

Janssen + Maluga Legal, the German-Australian law firm, represented the Croatian metal sheet-system producer We-Kr d.o.o on the purchase of the prestigious German company Südluft Systemtechnik GmbH & Co KG as part of the Eisenmann Gruppe. The Croatian conglomerate won the bidding on the 13th of December 2019 to buy Südluft out of their insolvency proceedings.

All working places are safe in the insolvency plan system.

Mr Ivan Križanec, the owner of We-Kr d.o.o will further invest and continue at the production place in Plattling/Germany. We-Kr d.o.o is developing, producing and assembling sheet systems with 432 employees.

The court’s final decision took place in January 2020 following the agreement of the insolvency proceeding creditors on the 13th of January 2020.

In accordance with the current EU data protection laws, please take a minute to review the Privacy Statement for using our website. Our terms describe how we use data and the options available to you. Read Now